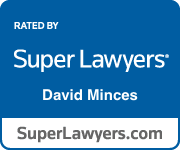 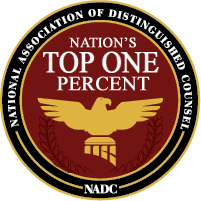 Over the past 20 years, David Minces has earned his reputation for excellence. As clients, colleagues and even opposing counsel can attest, David is a relentless, creative and strategic force in the courtroom when fighting for clients. David’s victories for his clients include winning lawsuits, arbitrations, and appeals. Several of David’s cases are published on Westlaw, and others have been reported in the news.

David has a history of success in cases involving fraud, defamation, discrimination, retaliation, breach of contract, breach of fiduciary duty, products liability, construction defects, premises liability, personal injury, and other high-stakes legal disputes including class action lawsuits. David is a fierce advocate and a proven winner who is not afraid to fight for people who have been harmed and have nowhere left to turn.  On multiple occasions, David’s cross-examination skills have caused his clients’ adversaries to give up in the middle of a deposition.

“David is the epitome of what an attorney should be.”

David’s work has generated many positive online reviews, with clients expressing appreciation for his honesty, knowledge and mastery of the law and facts of his client’s cases, responsiveness, compassion, friendliness, and belief in fighting for what is just and fair. As one former client said about David, “He is one of the best men I know in addition to being one of the best at his job.”

David graduated from University of Nebraska – Lincoln with a Bachelor of Arts in Journalism and minors in English, History, and Psychology. After working for a few years after college, David earned his law degree from Southern Methodist University Dedman School of Law in 2000. During law school, David served as Administrative Editor of the Computer Law Review & Technology Journal. As a lawyer, David has periodically mentored law students by offering internship opportunities and by judging various mock trial and moot court competitions.

“He is compassionate with his client and believes in fighting for not just the little guy, but what is right and fair.”

David achieved the distinguished AV Preeminent Rating by Martindale-Hubbell in 2016 and has maintained it every year since. Additionally, he was selected by his peers for inclusion in Texas Super Lawyers Rising Stars from 2009 to 2010 and was named to Texas Super Lawyers in 2019 and 2020. David is considered to be among the top one percent of trial lawyers by the National Association of Distinguished Counsel and has received numerous other accolades during his career. David is a member of the Houston Bar Association Labor and Employment Section and the State Bar of Texas.